3 Now the serpent was more subtil than any beast of the field which the Lord God had made. And he said unto the woman, Yea, hath God said, Ye shall not eat of every tree of the garden?

2 And the woman said unto the serpent, We may eat of the fruit of the trees of the garden:

3 But of the fruit of the tree which is in the midst of the garden, God hath said, Ye shall not eat of it, neither shall ye touch it, lest ye die.

4 And the serpent said unto the woman, Ye shall not surely die:

5 For God doth know that in the day ye eat thereof, then your eyes shall be opened, and ye shall be as gods, knowing good and evil.

6 And when the woman saw that the tree was good for food, and that it was pleasant to the eyes, and a tree to be desired to make one wise, she took of the fruit thereof, and did eat, and gave also unto her husband with her; and he did eat. (Genesis 3:-1-6 KJV) 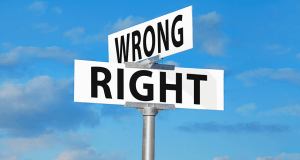 When God completed His perfect creation, it was “very good.” There was no evil, no disorder, no chaos, no conflict, no pain, no discord, no disease, no decline, no death. But now we live our whole lives in a perpetual struggle with all of those things. Frankly, everything in our world now is anything but good.

What has gone wrong?

When Adam and Eve disobeyed God, sin entered into our world, and everything went from being very good to being very bad. The Bible says, “Through one man [Adam], sin entered into the world, and death through sin, and so death spread to all men, because all sinned” (Romans 5:12, NASB).
We’ve all come from Adam and Eve, so we inherited what theologians call original sin. When Adam sinned, he brought death on himself and everybody else.

There’s another aspect to sin: the curse. Not only did Adam’s sin affect humanity’s moral life; it also affected the ground, the material universe. Romans 8:22 says “the whole creation groans” under this curse. The reason there is disintegration and death in the universe goes right back to Genesis 3.

Talking About Sin
The public has no interest in talking about sin today. To say that we are corrupt at birth? To say we are all born with an evil bent, a desire to violate the law of God and to dethrone God and replace Him with ourselves? To say we are incapable of doing anything good? Our culture doesn’t want anything defined as sin. Everything is simply a lifestyle choice. The idea of guilt is considered medieval, obsolete and unhealthy.

Politicians, moralists, educators and sociologists try to fix society, but they can’t do it because they don’t deal with the reality of what is in the heart. All humanity has a vile, rebellious, corrupt nature. Our thought-life is corrupt; our emotions are corrupt; our will is corrupt; our behavior is corrupt.

Defining Sin
Let me give you a definition of sin. Sin is any lack of conformity to the moral character of God or the law of God. We sin by thinking evil, speaking evil, acting evil or omitting good.

Sin is further defined in Romans 14:23: “Whatsoever is not of faith is sin” (KJV). When we do something that goes against trust and faith in God, that’s sin. When we know something pleases God but don’t do it, that’s sin. And in
1 John 3:4 we read, “Sin is the transgression of the law” (KJV). So sin is any violation of God’s moral character or His law. Where is God’s law revealed? In Scripture.

What is our society’s standard today for determining what is evil? Once, our standard was the Bible, but that’s changing rapidly. As we continue to move deeper into the morass of sin and dislodge ourselves from any set standard, we have no way to define morality except to take a survey.

The Nature of Sin
Now let’s look at the nature of sin.

First, sin is defilement. It is to the soul what scars are to a beautiful face; what a stain is to white silk cloth. It is ugliness across the face of beauty. When a sinner really sees his sin, he sees it for what it is. Ezekiel 20:43 says, “There you will remember your ways and all your deeds with which you have defiled yourselves; and you will loathe yourselves in your own sight for all the evil things that you have done” (NASB).

Second, sin is rebellion. The sinner tramples on God’s law, tramples on God’s character, willfully crosses God’s will, affronts God, mocks God. Sin is, at its core, rebellion.
Third, sin is ingratitude. Everything we have, everything we are, is from God. Paul says the wrath of God is revealed from heaven, because “When they knew God, they glorified him not as God, neither were thankful” (Romans 1:21, KJV). All the food the sinner ever eats, God gave him. All the air the sinner ever breathes, God gave him. All the joys the sinner ever experienced, God provided. The sinner eagerly embraces God’s graces and mercy and then betrays Him by being the friend of God’s enemy, Satan.

We have to understand sin because, most of all, it’s why we need a Savior. God has sent Him, the Lord Jesus Christ, to save His people from their sins. And He saves sinners who repent and ask Him for forgiveness.

How do we tell our society about a Savior who will save them from sin when their definition of sin is basically non-existent? You tell them their behavior is an affront to God’s holiness and a violation of His law, which is found in the Bible. You stress the truths of God’s holiness and His hatred of evil. You point out that God is also just and righteous, which means He cannot simply look the other way and pretend evil doesn’t exist. Although He is longsuffering, He must punish sin in the end.

That’s what the cross is all about. Christ, the only sinless Person who ever lived, took the full weight of sin’s guilt on Himself and bore the punishment for it (2 Corinthians 5:21). He died as a substitute for sinners. Those who trust Him receive forgiveness, not because God simply overlooks their sin, but because Christ has already paid for it. That’s why the cross perfectly illustrates both the wrath of God against sin and His unfathomable love for sinners. That’s the central meaning of the Gospel.

What an amazing reality! As defiling and corrupting as sin is, as openly rebellious and ungrateful as it is, God still embraces the sinner who comes in humble repentance and asks in faith for forgiveness. May God bring many sinners to repentance and salvation. And may He use us to that end, in the name of Jesus, His Son and our dear Savior. Amen.